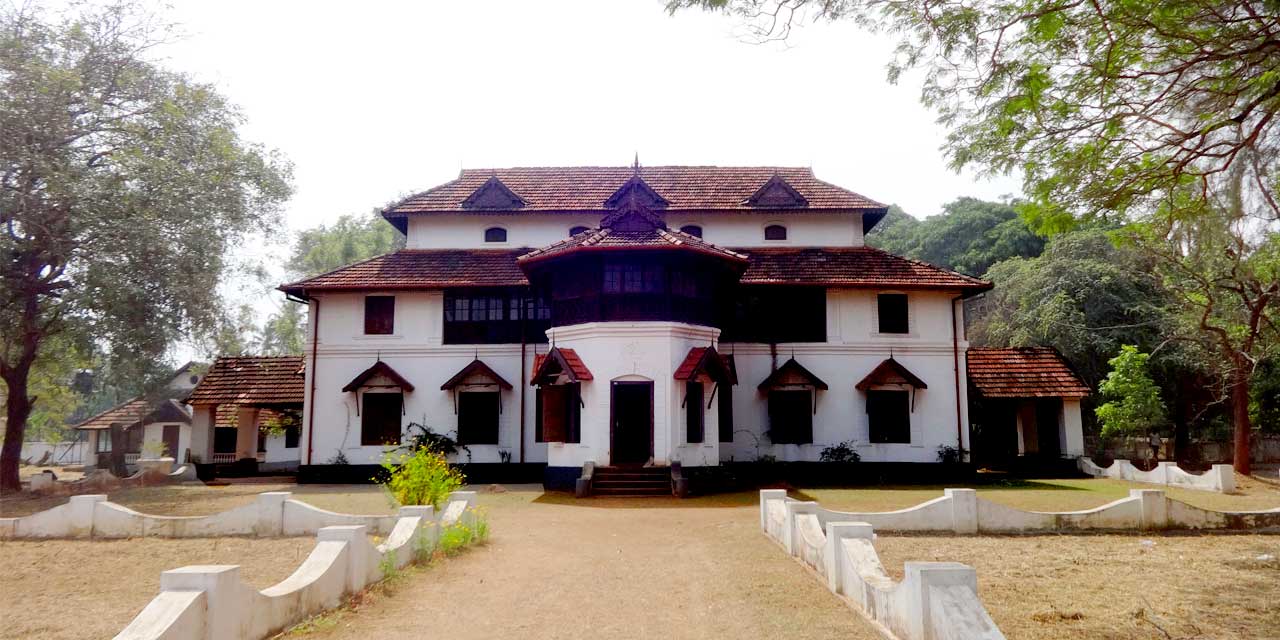 Public visit inside the Kollengode palace is possible only by appointment

Munnar is synonymous with cool air and tea gardens. But did you know it is also associated with British and European architecture and some palaces that are not often spoken of? Kollengode Palace is one such wonder in the Thrissur district of Kerala.

The Kollengode Palace was born out of a royal father’s love and generosity towards his daughter. The Raja of Kollengode saw through the construction of this palace while the political climate was fraught with the presence of the British and other European territories that sought to enlarge their influence in the region.

This is one of the reasons why the Kollengode Palace bears witness to the Western architectural patterns that coexist with the prominent Kerala style. Also known as Kollengode House, the palace sports sloped brick roofs and large wooden windows.

The majesty of the Kollengode Palace is also seen in how it does not levy any entry fee for viewing the palatial grounds and the building from outside. However, if you plan to step in and see any of the museums, you will have to adhere to their timings and fee schedule.

While the Mural Painting Museum (which is also known as Chuvarchitra Kala Museum) is open on all days of the week from 9 AM to 5 PM, the District Heritage Museum runs from Tuesday to Sunday from 10 AM to 5 PM. In addition to Mondays, this museum is also closed on all national holidays.

At the Mural Art Museum, adults are charged INR 10 per head as the entry fee while children from the ages of 5 to 12 can enter for just INR 2 per kid. Toddlers under 5 enter without any fee. If you would like to take your camera along, a fee of INR 50 will be charged for still cameras while video cameras will set you back by INR 250.

History Behind the Kollengode Palace

The palace of Kollengode was built in 1904 at the behest of Vasudeva Raja, the then king of the village of Kollengode. The Raja of Kollengode commissioned the construction of this palace for his beloved daughter. While the original edifice (called Kalari Kovilakam) remains in the nearby district of Palakkad, a part of the palatial grounds and this building are retained in Thrissur.

About 70 years after the palace was ready, the property changed hands and came to the Department of Archeology. In 1975, the Kollengode Palace was turned into the District Heritage Museum. In 2009, the Mural Art Museum of Thrissur became a part of the palace, taking it to new heights in terms of cultural awareness and appreciation.

Interesting Facts About the Kollengode Palace

If you are visiting the Kollengode Palace of Thrissur, let this trivia help you keep an eye out for some interesting artefacts and other finds that you should not miss:

1. Among the exhibits on display at the museum in the palace are the personal belongings of the Raja of Kollengode, Vasudeva Raja.

2. The rulers of the village of Kollengode were not always called ‘Rajas’. In fact, all the landlords of the eastern part of Palakkad were called ‘Vengandu Nambidi’ after their ancestor Vengandu Swaroopam. Only when the king of the princely state of Mysore, Hyder Ali, conferred the title of ‘Raja’ upon them did they come to be called Rajas.

3. The folklore section of the Kollengode Palace is arrayed with tribal artefacts such as paintings, sculptures, kitchenware and other items of tribal origin.

4. The area around the palace is surrounded by mango trees and other plants set in manicured gardens, lending it a regal ambience.

5. The collections at the museum include murals curated from various parts of Kerala (particularly, Thrissur, Palakkad and Wayanad), temple miniatures, statues of famous people, monuments, archaic engravings on stone, and manuscripts scribbled on dried and processed palm leaves. Some of the treasures displayed here have been found from Thrissur’s woods.

6. Dating back to the stone age or megalithic era, the museum also exhibits Nannangadi (urns used for burial purposes according to Hindu rituals performed after a person’s demise), earthen pots, red and black utensils, black wares with russet coating and ancient tools.

8. At the paintings section of the museum, one will find remakes of some rare murals, apart from paintings sourced from Kanjoor Church and Mattancherry Palace. Forgotten sketches of religious sites like Badarinath, Kashi, Kanyakumari and Rameshwaram are also displayed here.

Places to Visit near the Kollengode Palace

Even though the location of Kollengode Palace is largely secluded from the nearest cities, this town has a lot of options waiting to be explored nearby:

1. Meenkulathi Bhagavathi Temple: About 5 km from the palace, this Hindu temple in the village of Pallassena takes just about 10 minutes to reach by car. Meenkulathi Bhagavathi Temple is the oldest one in the village where the deity worshipped is Meenakshi. There are many more idols which stand around the central statue. Built in Kerala-style architecture, this shrine boasts of a tank used for the purpose of performing various religious rituals. The temple is open to visitors on all days of the week from 5:30 AM until 10:30 AM and again from 5:30 PM until 7:30 PM.

2. Seethargundu Waterfalls: At a distance of 8 km from the Kollengode Palace, a beautiful waterfall awaits. The 20 minutes of drive will bring you to the region of Seetharkundu which has a view point and also a waterfall at some distance away. Accessible from 6 AM to 7:30 PM, the falls begin from the Nelliyampathi Hills. Beware of monkeys as you walk along the precarious trail to get a glimpse of the falls! Apart from taking photos, one can also shop for jams, squashes and tea.

3. Pothundy Dam: Almost 18 km from the palace, the Pothundy Dam takes almost half an hour to get to. Also called the Pothundi Reservoir, the place has a view point and a garden as well. One of the oldest dams in the country, used for irrigation, Pothundi offers boating facilities for tourists. The Meenichiladipuzha and Padipuzha rivers are dammed by this reservoir built in 1971. One can enjoy the unrivalled views of the Nelliampathi Hills and teak forests from here.

How to Reach the Kollengode Palace

A few hours from the popular hill station of Munnar, the Kollengode Palace looks elegant in the town of Thrissur. If you wish to pay a visit to this Kerala-style palace, here are some of the ways you can get here:

By Air: Coimbatore International Airport is the nearest airport to this heritage site, at a distance of 80 km. The drive from this airport in Tamil Nadu is over 2 hours. The other option is the Cochin International Airport in Kerala which is over 100 km away, taking about 2 and a half hours for the road journey. Pre-booked cabs are easily available at either airport but those are generally quite expensive. You can also call for a radio taxi once you land.

By Train: If trains are your preferred choice of transportation, you can book your tickets through a route that halts at any of these 3 railway stations close to Kollengode Palace – Palakkad Junction, Palghat Railway Station or Kanjikode Railway Station. At a distance of about 23 to 30 km, the journey will take anywhere between 45 minutes to a little over an hour. It is advisable to be ready with your luggage a few minutes before your train is to arrive on the platform.

By Bus: If a bus ride sounds more like your cup of tea, the Erimayoor Bus Stop happens to be the nearest place to halt to get to the palace. Once your intercity bus reaches the bus stop, the remaining road journey will take only about half an hour as it is 17 km away. When travelling overnight, it is better to carry an eye mask and noise cancelling headphones as most of the buses run local movies at very high volumes for a major part of the journey.

By Car: To skip the trouble of pre-booking train tickets several months in advance, changing different modes of transport while paying through the nose for a flight, or worrying about bed bugs on night buses, hire a car from top car rental companies in Kerala with a professional driver to take you to Kollengode Palace from your place of stay. This way, you can also travel at your own pace and stop to take photos of the lovely surroundings. You can also drive all by yourself, but that will require a high level of alertness, and you won’t be able to relax that much on your holiday.

The scenic beauty of Kerala welcomes its visitors with open arms and to help you plan your holiday here, we at Kerala Tourism, a division of Holidays DNA present our clients with customised tour packages. Kerala Tour packages are designed to cater to various kinds of travellers which also include a tour of famous places to visit in Kerala. Please fill the Contact Us form to know more about our offerings.

Places to visit in Munnar