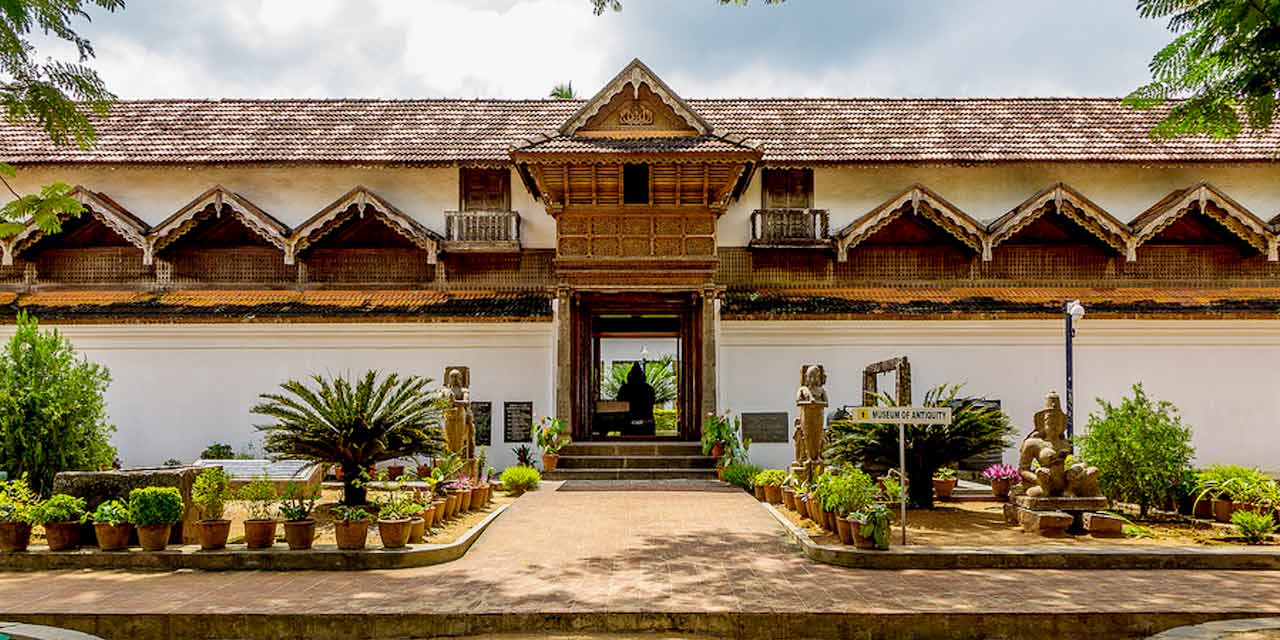 Where is the Padmanabhapuram Palace located?

This historical marvel is situated within a fort, in a small village – Padmanabhapuram, near Trivandrum. The palace complex is divided into several sections, with the royal furniture, paintings, weapons and others put on display. It also has the Padmanabhapuram Palace museum, which is home to many antiques and artefacts.

The entire palace is made from wood and the Kerala Government maintains it. The intricate carvings on wood and the simplistic decorations make this place a must-visit for anyone who wants to witness the magnificence of the Venad kingdom.

The small Padmanabhapuram village was known as Kalkulam earlier, and it was the capital of the powerful Venad Kingdom.

Kalkulam wasn’t the only place where the Venad rulers set their base. Udaygiri, Eraniel and other places nearby also had royal palaces and temples, the remnants of which can still be seen. However, because of the security provided by the mountains, the headquarters shifted to Kalkulam.

Who built the Padmanabhapuram Palace complex?

Padmanabhapuram Palace history goes back to the 1600s. It was built during the reign of Iravi Varma Kulasekharan Perumal. At its core is the Kalkulathu Koikkal, the main palace. It is also known as Darpakulangara Koikkal in old records.

During the eighteenth century, Anizham Tirunal Marthanda Varma ordered a renovation of the palace, along with the construction of a stone fort around it. And many of the structures in the present palace complex were constructed/renovated during his reign.

Marthanda Varma dedicated the palace to Shree Padmanabha Swamy, the protector deity of the Venads. And the palace was renamed to Padmanabhapuram Kottaram (Kottaram meaning palace, in Malayalam).

In 1809, British soldiers captured Padmanabhapuram, and the royal family then shifted to Thiruvananthapuram (Trivandrum). They, however, used to visit the palace during the Navratri festival celebrations. But those grand celebrations stopped in the 1840s, and the downfall of Padmanabhapuram Palace began.

Later, in 1934, J. H. Cousins, the Art Advisor to Travancore Government, and R. Vasudeva Poduval of the Archaeology Department rediscovered this historic palace. And with the support of Shree Chithira Tirunal Bala Rama Varma, the last Maharaja of the princely state of Travancore, Padmanabhapuram Palace Kerala was transformed into a museum complex.

The palace complex was built in the architectural style of Kerala with locally available materials. Stones were used in the palace's foundation and the pillars of the ground floor. The fort had a moat all around it, and mukhya vathil was the primary entrance to the complex.

Wood played a dominant role in Padmanabhapuram Palace construction. It was used in the walls, roof, pillars as well as beams. And lime was the primary element in the flooring of the buildings in the complex.

Much of the structure was constructed with burnt brick and lime mortar. And the buildings were interconnected by corridors and overhead walkways.

The palace is an example of outstanding artwork in wood and stone, which has withstood the test of time.

The complex of Padmanabhapuram Palace Trivandrum comprises several structures spread throughout the area. Following are the ones which you mustn’t miss –

1. Mukhya Vathil and the courtyard – The palace has two arched gateways (padippura) for entry. But it is the intricately carved Mukhya Vathil (or the main gateway) which catches the eye. It has large doors mounted with metal spikes. The gateway opens into a spacious courtyard which used to be the ground for entertainment. And you get a panoramic view of the palace from the entrance.

On the southwest corner, you’ll find the museum constructed in 1993. It resembles the style of the palace complex. The museum collection consists of wooden sculptures, ancient coins, paintings, and many other excavated articles from South India.

2. Poomukha Malika – Poomukha Malika is a double storied building, which once served as the reception hall for officials and royal guests. The ground floor has a pillared verandah which allows access to the upper floor. The hall has a few artefacts and royal collections on display.

The roof has three wooden gables carved with religious symbols, mythological creatures and other designs. And the northern wing of the building houses the 200 years’ old Mani Meda (or the clock tower).

3. Mantrashala – Mantrashala was the chamber where the king held important meetings. It has a row of ornamental chairs depicting the seating arrangement. The roof is supported by wooden pillars, featuring carved panels of wood. And the floor was made of a mixture of lime, coconut shells, sand and other materials.

4. Thai Kottaram – It is the mother palace; the oldest structure of the complex, and its core. The entrance opens to Ekantha Mandapam, a hall used for special religious activities. A distinct feature is a carved pillar on a stone base which supports the beams. And the wooden ceiling is adorned with lotus motifs. The inner section of this building has rooms laid around a courtyard; and a trapdoor to a secret tunnel.

5. Uppirikka Malika – Uppirikka Malika, to the northwest of Thai Kottaram, is regarded as the sacred place in the complex. It has a unique pagoda-style roof. The ground floor of its elegant edifice housed the royal treasury, and the first floor had the king’s bedroom. The beds present in the room are beautifully carved, and so are the wooden beams in the ceiling. A window looks out to a small yard used for soldiers’ practice.

The king’s room connects to a spacious hall – Anthapuram, which used to be the ladies’ quarters. And the second floor of Uppirikka Malika used to be a venue for meditation and religious ceremonies, while the topmost floor was dedicated to Lord Padmanabha – the protector deity. A poster bed, the holy cot of Shree Padmanabha Swamy, is in the room.

6. Navarathri Mandapam – It is a large hall, located in the northwest of the complex, used for performances during Navaratri celebrations. The building also has a small temple dedicated to Goddess Saraswathi. And renowned artists used to come during the annual Navaratri ceremonies and performed before the revered goddess. It is built in the Dravidian style and has stone pillars adorned with human figures in various dance forms.

8. Valiya Oottupura – Valiya Oottupura is a double storied building towards the south of the complex. It was used as the dining hall and could accommodate around 2000 people at a time. The ground floor has stone columns, while the first floor has wooden columns to support the beams.

9. Homappura – It is a single-storied building, which served as the prayer hall and a venue for religious offerings to the Gods. The Homappura Kulam, a tank which had an integral role in the religious activities, is in the north and a temple of Goddess Saraswathi is in the east of the building.

Towards the extreme north is Panthadikalam Malika, an extension to Thekkaetheruvu Malika. While the upper floor has a large hall, the ground floor is divided into several rooms for administrative works. And towards the east of Thekkaetheruvu Malika, lies Ambari Mukhappu. From the openings in this ornate bay window, a ruler could have addressed his subjects or watched any religious procession.

11. Indra Vilasam – Indra Vilasam was designed to be a guest house for the foreign guests. It was built in a colonial style. The high ceiling, wide wooden staircase and large windows made the interiors airy. To the south of the building, lies a landscaped garden.

13. Ayudhappura – Ayudhappura used to be an armory during the royal reign. It is located on the west side of the palace complex, accessible through Natamalika. The collection of arms included pistols, swords and daggers among other items. These items are now on display in the newly built museum.

14. Lakshmi Vilasam – It is one of the last structures built in the complex. Lakshmi Vilasam encompasses a courtyard with rooms surrounding it. The architecture is influenced by the colonial style, and it is different from the rest of the buildings in Padmanabhapuram Palace.

Padmanabhapuram Palace ticket rate is ₹10 and ₹35, for children (5-12 years) and adults, respectively. For foreign nationals, the entry fee is ₹100 for kids and ₹300 for adults. Apart from the fees for entry, you also have to pay ₹50 if you want to use your camera and ₹2500 if you want to shoot videos.

The palace complex is open for tourists throughout the year except for Mondays and national holidays. The visiting time is between 9 AM and 1 PM, and again from 2 PM to 4.30 PM. It remains closed between 1 PM and 2 PM.

The best season to visit Padmanabhapuram Palace is winter. It begins in October and ends in February. The temperature remains pleasant throughout the day. You can also visit it during the monsoon season, between July and September, but the weather might be too humid for a comfortable visit to the palace.

Also, plan your visit during the morning hour, so that you can get ample time to tour around the palace missing nothing of importance.

Padmanabhapuram wooden palace complex has a few different buildings which used to be the parts of different blocks. Some are connected through corridors while others are separated by walkways. And it would take you about 2 to 3 hours to explore this gorgeous complex.

How to reach Padmanabhapuram Palace from Trivandrum?

Trivandrum to Padmanabhapuram Palace distance is 60 km. Regular buses from Trivandrum are available which can drop you near the palace. It lies on the way to Kanyakumari. And you can also book a cab from top car rental companies in Kerala to reach the palace.

And here are the different ways to reach Trivandrum –

By road – Trivandrum has a good network of roads to connect it to the nearby cities. Regular buses are available from Coimbatore, Kochi and Madurai among others. Luxury buses from other faraway cities like Bangalore and Chennai are also available. The central bus station is about 53 km away from Padmanabhapuram Palace. You can also hire a cab or drive a car from nearby cities.

By rail – The Trivandrum Central railway station connects the city to other parts of the country. It has daily trains coming from the nearby towns, metropolitan cities and many other places. It is about 53 km from the palace complex.

By air – Trivandrum International Airport, about 63 km from Padmanabhapuram Palace, connects the city to various places around the world. Direct flights from Indian cities like Bangalore, Delhi and Kochi are available. And international flights from Singapore, Maldives and Middle East cities among others also arrive here.

If you’re looking to experience a perfect holiday time while exploring the various places to visit in Kerala, book an all-inclusive Kerala tour package with us. We at Kerala Tourism, a division of Holidays DNA, carefully design these packages, keeping our clients’ requirements in mind. Our team of experts helps you plan your holiday at pocket-friendly prices. To know more about our services, reach us out by filling the Contact Us form. We will get back to you shortly.

Places to visit in Trivandrum